The black pines have been growing slower than usual after summer decandling. It is possible that is a response to less fertiliser than previous years. I am pleased to have small buds on these pines but I’ll try to feed more often through next winter and see if that makes a difference next summer. 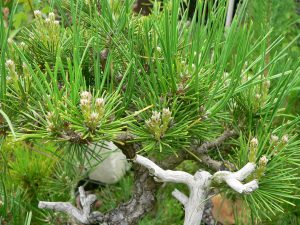 Here are the clusters of buds that are growing after candle pruning in mid December (early summer here). Note that these summer buds do not have the bare ‘neck’ that the stronger spring candles have. Not having bare sections means I can have much more compact growth and better ramification. Needles should also be smaller on these smaller buds which will add to the impression of a mature tree.

END_OF_DOCUMENT_TOKEN_TO_BE_REPLACED

When I first started to grow banksias for bonsai they were not very successful. Most just lasted a year or two then suddenly died. Given that banksias have a reputation for being quite sensitive I just thought the genus was not suitable then I started to see some great banksia bonsai and gradually pieced together a couple of important facts about banksia bonsai. END_OF_DOCUMENT_TOKEN_TO_BE_REPLACED

Spreading basal roots, known by the Japanese term ‘nebari’ is considered very important for maple bonsai. Surface roots are prominent features of old maples, pines and elms so these features are also valued in bonsai of these species.

Nebari should, ideally, spread evenly all around the base of the tree, showing enough to give the tree the air of age and stability. END_OF_DOCUMENT_TOKEN_TO_BE_REPLACED

Leaf drop has been slow and erratic at Shibui Bonsai this year. Some of the maples still have leaves but many of the tridents are now bare. that gives the perfect opportunity to review ramification and make alterations. END_OF_DOCUMENT_TOKEN_TO_BE_REPLACED 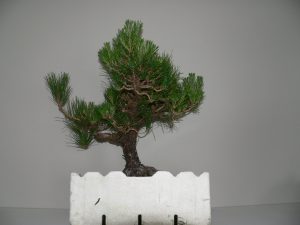 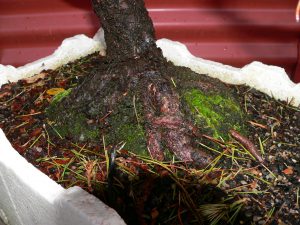 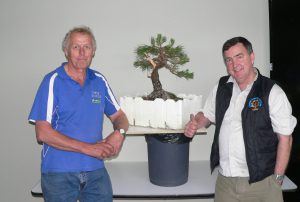 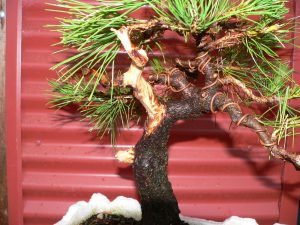 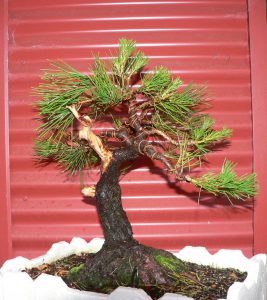 The new shoots on Black pines have matured so it is time to thin out all the new shoots that have grown since decandling.

It is important to know that this is part of the technique used to REFINE MATURE pines. Younger, developing pines should be allowed to grow freely to gain strength and size and cut back hard every couple of years. Decandling is used to ramify the branches on trees that are closer to being mature bonsai. END_OF_DOCUMENT_TOKEN_TO_BE_REPLACED

For a while during the real heat of summer my trees slowed up and gave me a rest from pinching and pruning that is so constant during spring and early summer. The weather has started to cool a little and we have had a few light showers of rain. This is the time of year that the Australian natives just love and they have started to grow strongly. END_OF_DOCUMENT_TOKEN_TO_BE_REPLACED

This trident maple featured in this post was grown from 3 separate seedlings. They were planted close and held together until the separate trunks grafted themselves into a single trunk at the base. Multi trunk bonsai are not particularly common because every extra trunk adds complexity and the possibility of faults that would make the whole tree unattractive.

END_OF_DOCUMENT_TOKEN_TO_BE_REPLACED

The callistemon I pruned a couple of weeks ago has new buds emerging from the leaf axils.

This year’s flowers have just started to open on this tree during the week so I thought I should share it with you.

The branches look a bit untidy at the moment. Callistemon flower on the tips of the shoots that grew last year. For many years I kept it well trimmed but, of course, was cutting off all the potential flowers every time I pinched the shoots. With advice from Derek, a master with Aussie plants as bonsai, I learned to allow the shoots to grow and mature so it can produce flowers. After flowering it is pruned quite hard then new shoots are again allowed to grow and mature for the following year’s flowers.

You will note that the flowers on this species are rather less impressive than many we see in gardens but I think the pale pink blush is nice on this bonsai. Flowers are also smaller than many which fits in well for a bonsai sized tree.