When I first started to grow banksias for bonsai they were not very successful. Most just lasted a year or two then suddenly died. Given that banksias have a reputation for being quite sensitive I just thought the genus was not suitable then I started to see some great banksia bonsai and gradually pieced together a couple of important facts about banksia bonsai.

Banksias in pots do need fertiliser. Much of the literature warns to be very careful with fertiliser near banksias because they are phosphorus sensitive and can die if fertilised with the wrong thing so being unsure what fertilisers were suitable I was not feeding them. I’m certain that a number of my experimental trees died of starvation before I discovered the truth. Banksias do develop proteoid roots that help them accumulate scarce phosphorus from the depleted soils where they grow but they only grow these proteoid roots when they are starved of nutrients. Some experimental work with the closely related South African proteas showed that if they are given fertiliser containing phosphorus from an early age or are introduced to it gradually the proteoid roots disappear and the plants are then able to tolerate higher levels of phosphate in the soil. Now I make sure I feed my banksias well like all my other bonsai and they are happy to take the same fertilisers as the rest of my trees. Many of my banksias are now are potted into mix containing standard osmocote rather than worrying about special low P ‘native’ fertiliser.

Quite a few of my earlier banksias died suddenly in late spring and summer. When I investigated the roots I discovered that the pots were usually crammed with very fine roots and, while the outside of the root ball was damp, the insides were bone dry. These trees died from dehydration despite being regularly watered. Banksias seem to quickly fill the pot with masses of very fine feeder roots to the stage where water cannot penetrate into the centre of the pot. Regular repotting seems to have eliminated this problem and now I try to root prune young, vigorous banksias each year to allow space for water during the summer.

Some early information about native plants as bonsai showed that most seem to prefer to be root pruned and repotted in the warmer months. Some experiments carried out here at Shibui Bonsai confirmed that banksias in particular do not tolerate root pruning well in the cooler months but thrive when roots are cut when it is warm. It does not seem to matter what growth stage the trees are at. I have root pruned banksias covered in fresh, actively growing new shoots and they continued to grow afterward. Usually I prune the trees to remove most of the soft new shoots but that does not seem to be absolutely necessary.

During the growing phase banksias can just be slip potted into larger pots. Because they have few larger roots that can get tangled up there’s not really any need to do a full root prune on growing trees. Simply turn the tree out of its smaller pot, place the root ball intact into a larger pot and fill the spaces with new mix. I even do this when planting banksias into the grow beds and have not had any problems with tangled larger roots when they are dug several years later.

When repotting I find that the masses of fine banksia roots are very densely tangled and are difficult to cut with traditional root shears. The roots are, however, quite brittle. Simply grabbing a handful of the root ball at a time and pulling will quickly reduce the root mass enough to repot successfully. When dealing with larger pots an old saw is useful. Simply saw through the root ball at a suitable depth to reduce the root mass. Sometimes I’ve even sawed off chunks around the edges to complete the root reduction before potting the tree back into fresh mix.

Banksia serrata. This one has been grown in a pot for around 5 years. I have found that banksias thicken quite well, even in relatively small pots. 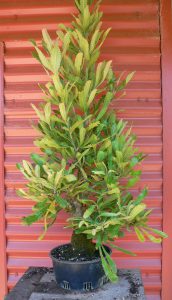 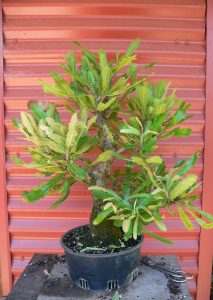 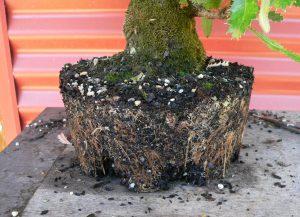 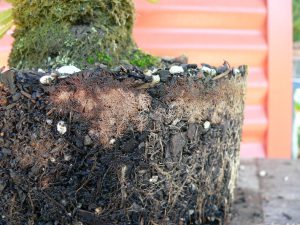 Proteoid roots. This one must have been getting a bit hungry. It has developed quite a lot of these proteoid roots to try to scrounge as much P as possible. fertilising this one with high P fertiliser would have made it quite sick and may even have killed it. 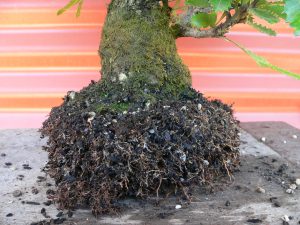 After root pruning most of the proteoid roots are gone so thus tree can now have normal fertiliser again.

Note that there are no larger roots visible. Banksias seem to rely mostly on the masses of fine feeder roots.

You can see that I routinely remove around half the root mass at repotting. 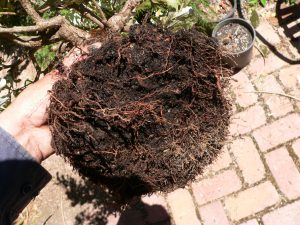 Curl grubs seem to like banksia roots. As soon as I removed this one from the pot I could see that something had been feasting on the roots

Luckily the damage is not too bad. I probably would have cut off nearly that much anyway. 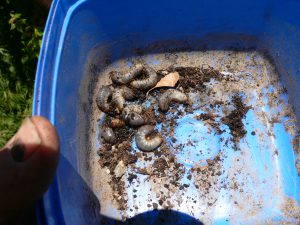 My turkeys really enjoyed helping me dispose of the grubs. 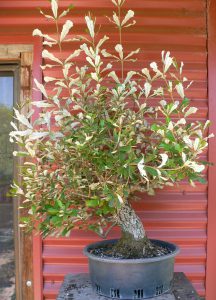 Banksia marginata. No curl grubs this time but I thought this one was ready to go into a bonsai pot for final development of branches and ramification. 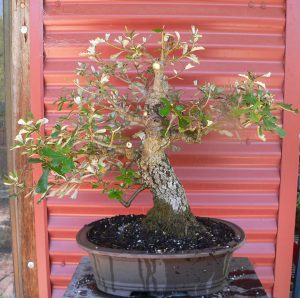 after pruning, root reduction and potting