Smaller, regional clubs have limited access to new ideas and expert advice so the AABC visiting tutor program is a great way for clubs to get some outside influences for our members. Our local club has just held a workshop with Joe Morgan-Payler.6 of our members took advantage of the opportunity and brought trees for Joe’s ideas, advice and assistance.

Some years ago, when he returned from his first stint as apprentice in Japan, Joe began talking about growing better stock for bonsai as is done in Japanese bonsai nurseries. As a result I began to wire and bend young shimpaku cuttings with the aim of growing them on to develop something like the wild twisted shimpaku bonsai we see at Japanese bonsai exhibitions.

Now that some of these have grown and thickened a bit I though it would be fitting to take one of these to get Joe’s first hand input into a suitable style.

This one is in a 15 cm pot. The trunk has many turns and twists in just 10cm of height and I’m aiming to keep it as a shohin sized bonsai. the question is what to retain and what to remove.

First priority was the trunk angle. After looking at all sides a view that showed more of the trunk was chosen.

The 2 lower bends are almost opposite which spoils the line a little so the tree is tilted toward the right which brings the left hand bend higher than the right one giving a better flow.

Many of the longer branches have been grown as sacrifice branches to hasten thickening of the trunk so they were first to go.

Other sacrifice branches have previously been converted to jins but now appear too long so these are shortened. Some of the branches with foliage closer to the trunk are wired and bent into position to give a spread of foliage around the tree. A couple of upper shoots become the crown of the new tree.

Note that not all branches on junipers need to emerge from the trunk where they are required. Branches are often wired and brought through down or around from other locations to give branching where it is needed.

As a final touch a couple of dead wood areas are started on visible bends. Joe feels that these will draw attention and highlight the bends and twists. Over a period of years these will be widened and lengthened until they join and form one or more deadwood strips along the length of the trunk. Building dead wood areas over a period of years gives texture and appeal to the dead wood as further layers of sapwood grow and are subsequently revealed as more bark is peeled back. 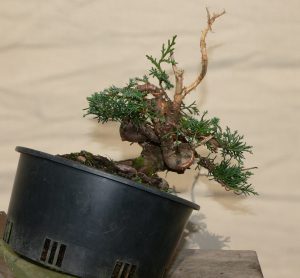 After the workshop this shimpaku is now a compact little bonsai with a highly intricate trunk. It will still take a couple of years for the foliage to thicken up and the shari will gradually develop as the tree grows and thickens.