I really love root over rock style bonsai, especially trident maples. Well established trees have roots that flow over and flatten out to clasp the rock as if the tree has been there for ages. I have been experimenting with ways to develop root over rock bonsai for more than 20 years in an endeavour to produce ever better root over rock plantings.

The old Japanese method was to paste ‘muck’ (a mix of clay and cow manure) onto the surface of the rock where the roots are to grow then press the roots of a seedling into it and plant the result into a pot or the field. When I tried this I found many of the roots with muck rotted and new ones sprouted which often were not in contact with the rock, spoiling the arrangement. Even if the roots in muck survived, new roots often sprouted and grew off into the surrounding soil. These new roots often grew better than the carefully arranged roots on the rock and left large scars when removed. Panty hose was suggested as a way of holding roots onto the rocks but roots grow through and the nylon takes a very long time to degrade and is almost impossible to remove once the roots have grown through it. Cling wrap and electrical tape were other methods trialled. These work really well but only on convex surfaces. If the rock has a hollow the wrap spans straight across, leaving the roots underneath free to wander away from the surface of the rock. Eventually I tried another material from the kitchen drawer which has worked best and produces excellent results more often than any other I have tried.

Here’s what you need: 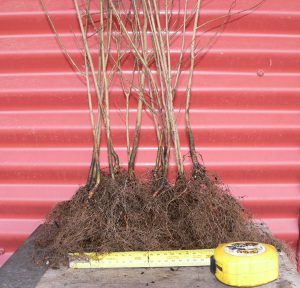 You don’t really need this many but you will need a few to choose from. Not every seedling will have the right roots and not all will suit each rock. The more choice you have the better your results will be.
Rocks: 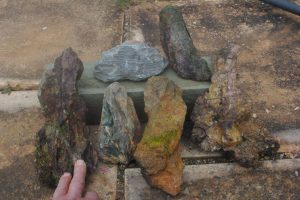 Again, you can get away with a few less than this but more choices will give better chances of a good match.
While you sort the seedlings, put the chosen rocks into a tub of water to soak. Dry rocks may suck the moisture out of the tender roots and may damage your plant.

Some of the seedlings will have a single strong ‘taproot’. Put them aside for other projects. Select the ones with several strong roots that will go over your rock. Wide spread roots will usually fit better than strong vertical ones ( the trunk usually splits or roots break off when you try to force the base of the trunk tight against the rock) 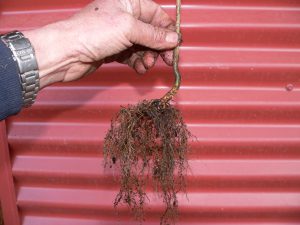 Select a rock and decide where the tree will look best. Root over Rock plantings usually look better if the tree is not sitting at the top of the rock. Try to avoid placing the tree where it will cover the best features of the rock as well. The rock might look best in a vertical position, horizontal or on an angle somewhere in between. Take some time to closely examine the rock and see what might be best. 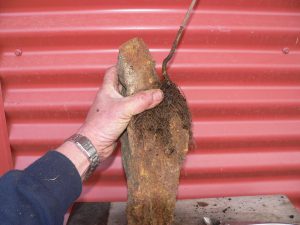 Now try to imagine the angle the trunk will take. Will it follow the line of the rock or emerge at an angle? After you position your tree on the rock this critical angle will be hard to change so plan well.
Also look where the roots will run down the rock. They will look best following natural fissures in the rock but imagine them much thicker and spreading on the rock surface and arrange the roots to avoid obscuring prominent features of your rock.
If your rock is not too tall, fold the foil lengthwise so that it is the same width as the depth of the rock the roots will cover. 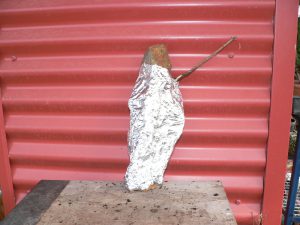 When finished you should have rock and roots wrapped in a cylinder of foil open at the top and bottom.
It is not necessary for the roots to stick out the bottom at this stage. They will grow quickly when the tree comes out of dormancy and because of the foil they have to follow the rock down to the bottom.

Now plant the whole thing up to the base of the trunk. the pressure of the soil will push the foil and roots within close against the rock surface. Do not let the soil cover the top of the foil because tridents will send out new surface roots at the expense of your chosen root hugging ones.

Root over rock plantings will need more water than others because the rocks act as a wick and suck up water and evaporate it into the air. I make sure new ones are watered daily until they are well established and plenty of roots have made it out the bottom of the foil package. 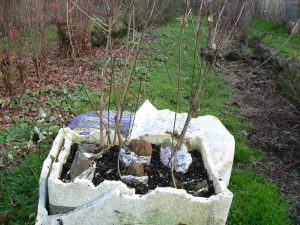 After a year you can unpot the tree and unwrap it to check progress. The foil will have started to decay and will probably need replacing anyway.

At this stage you may still be able to make modifications to the roots if they are not in the ideal positions. If lots of new roots have sprouted you can remove some to leave discrete roots running down the rock. Where roots cross, the top root will be pushed away from the rock as the one under it thickens so try to avoid crossing roots.

Lots of roots close together will merge into a single plate of root over time. 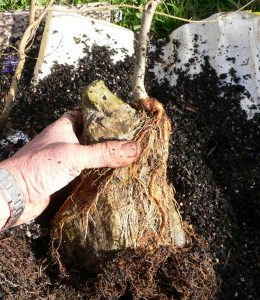 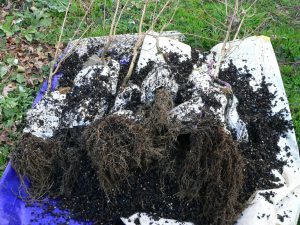 Prune the trunk back hard to give movement and direction, wrap the rock and roots in fresh foil and replant for another year. I plant into my growing beds in the ground for the second year to speed up development.
When the trunk and roots have reached a suitable size in relation to the rock, lift the tree, unwrap and plant at the required depth in a training pot. For most smaller trees one year in the ground is enough to get the roots and trunk to a suitable size.
This technique will also work well with other species if you want to try root over rock plantings with Japanese maple, Chinese elm, pines and other species.