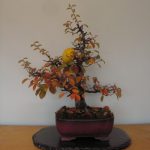 Its now May and here at Shibui Bonsai nights have been cool enough for the deciduous trees to start to think about dormancy. One of the great delights in growing deciduous bonsai is the autumn show of colour.

In some parts of Australia the climate does not produce maximum autumn colour but here in the foothills of the great dividing range we get cool nights and bright sunny days through April and May to produce some great autumn colour.

Cold nights, Sunny days and relatively dry conditions are the factors that produce maximum colour intensity as the trees withdraw the green chlorophyll from the leaves, leaving the natural pigments that we see as autumn colour. This year the colours are not as intense as some years but the colour has still been quite attractive.

Different species produce different displays of colour. Japanese maples are well known for the range and intensity of autumn colour they produce. Trident maples that are such a favorite for bonsai produce pastel tones of pinks and orange with occasional stronger reds. Other bonsai favorites that can give a good display include English Elm, Liquidamber, wisteria. Gingko change to a clear, butter gold and it is interesting to note that gingko are actually conifers, despite having flat leaves. There are also a few other conifers that are deciduous and can be grown as bonsai. Keep an eye out for Larix species – the larches (which also have the most wonderful lime green spring shoots), Taxodium sp including swamp cypress and Metasequoia – dawn redwood. 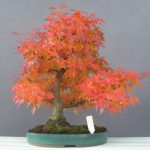 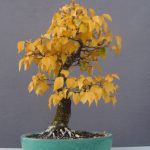