I usually repot any native plants in November or December. There were plenty that needed doing this season because I had not repotted for a couple of years. I find that many native plants grow lots of fine roots in the pots and quickly get to the stage where there is no room in the potting mix for water or air to penetrate. This mans that it becomes increasingly difficult to keep the mix hydrated and I have lost quite a few trees because I have not repotted often enough.

After root pruning most of the experimental natives that I have growing in training pots I moved on to my Callistemon – waterswept style.

In case you have not heard yet, Many of our Australian native plants prefer to be root pruned when they are in full growing mode and seem to recover from repotting best during the warmer months of the year. This callistemon was repotted just before Christmas – late in December in the heat of the Australian summer.

I pruned the tree a week or so before to remove the new growth from last season and the few flowers it had produced in November. Some of the shoots which had ben pruned earlier in spring had strong new shoots growing. 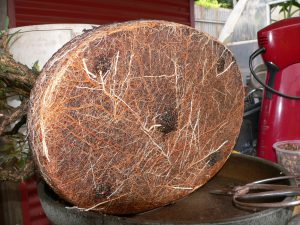 After cutting the roots. I’ve taken quite a lot off. Most of the remaining mass is actually the rock it is growing on. 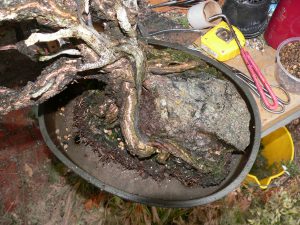 The shallow pot does not allow room for much to grow but I’ve cut back to where the rock shows through the roots underneath. 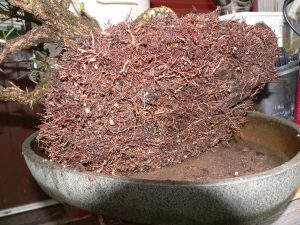 A thin layer of mix in the base of the pot, replace the tree and fill the pot with fresh mix. 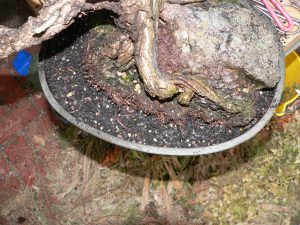 Add a layer of mix, replace the tree and top up with mix

A final surface dressing of gravel to try to suggest the river running along side the tree, water it in well then back onto its normal stand where it gets full sun pretty much all day. 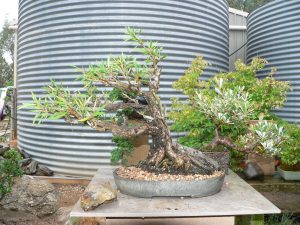 I’ve also mentioned before that native plants needing special fertiliser is not correct. This tree has standard osmocote in the new mix and will receive normal liquid fertiliser whenever the other exotic species get some. Later in summer I will start using a higher K fertiliser (flowers and fruit) to try to stimulate better flowers next spring.

You may also have noted that I don’t always follow standard bonsai practice. This tree is not tied into the pot. It never has been. The rock and broad root base are quite enough to hold this tree steady in the pot until new roots grow. I also put my freshly repotted trees right back where they are to grow straight after repotting. In this case in full sun. In my climate I find there is no need to provide protection or shade for freshly root pruned trees.